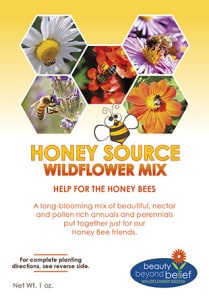 In order to produce 1 pound of honey, bees will visit approximately 2 million flowers. An average hive of bees must fly 55,000 miles to produce a pound of honey. One bee colony can produce 40 to 100 pounds of honey per year. The average foraging bee makes about 1/12 teaspoon of honey in its lifetime. When you consider these facts, it is truly a miracle that honey is so well-known and widely used. The very first origins of keeping bees and honey is not known but there are drawings from early Egypt depicting the practice. Honey was called “The Tears of Re” (Re, also referred to as Ra, was the Egyptian Sun God).

Honey bee colonies tended by a beekeeper often produce more honey than they need to survive during the cold winter months when there are no blooms. A responsible beekeeper harvests only the extra which is produced in a “honey super”. These are smaller boxes on top of the two brood boxes separated from the hive by a “Queen Excluder”. No brood is raised there and the bees fill it up with excess honey.

Buyer beware if you purchase large jugs of honey at a steeply discounted price. Imported honey is often only a small percentage of honey and a large portion of it is actually sugar syrup. Buy from a local beekeeper, if at all possible. If you don’t know one, check out Farmer’s Markets, fruit stands, small locally owned grocery stores or cheese shops. You can also look for a local beekeepers association and contact them.

Always purchase unrefined honey which has not been heated over 100 degrees and is filtered through a fine mesh strainer. All honey will crystallize over time, some much sooner than others. How you treat the crystalized honey is up to you, but to retain the beneficial properties, warming the container in hot water is the best way to go. Creamed honey is honey that has been pre-crystalized using a starter with controlled, very-fine crystals. Most beekeepers who produce honey to sell are familiar with how to produce creamed honey.

Honey has been used for centuries as a throat-soother for coughs and colds and to treat topical injuries, particularly burns and scrapes. It has also been used to treat animals suffering from “road rash” and in patients with foot problems caused by diabetes or those who suffer from ulcers. There is also strong evidence that honey taken at bedtime regulates blood sugar and causes more restful sleep. Many believe (yours truly included), although there is no medical evidence, that a spoonful of unrefined honey daily will cure, or at least minimize seasonal allergy symptoms. The more local the honey is, the better because the honey contains small amounts of pollen from your particular area. Honey from Boston may not be as beneficial for someone who lives in Los Angeles.

Bees generally forage in a 2-mile radius but may go up to 5 miles to reach pollen and nectar sources. You can help your local honeybee population by not using pesticides and by planting flowers for pollinators such as our Honey Source or Bee Rescue mixes.

Most honey produced by a local beekeeper will be wildflower honey, meaning a mixture of whatever is in bloom.  Varietal honeys such as orange blossom or lavender require that many acres of those crops must be grown near the beehives and the honey supers pulled off the hives when the bloom season is over. It is a lot of fun to try these varietal honeys and notice their smells and flavors. The honey from my hives tastes different every year but is always delicious. Last year I noticed an apple flavor in it which makes sense because I live in an area with many apple and crabapples nearby.

Fall Blooming Plants for Pollinators
Fifth Annual Boulder Bee Festival
WHY ARE NATIVE PLANTS IMPORTANT?
Taking Care of the Bees & Other Creatures this Fall
Back To School
JUNE HAPPENINGS IN THE HONEYBEE HIVE
The Secret Life of a Queen Bee
Mexican Sunflower, Pollinator Magnet!
0 replies