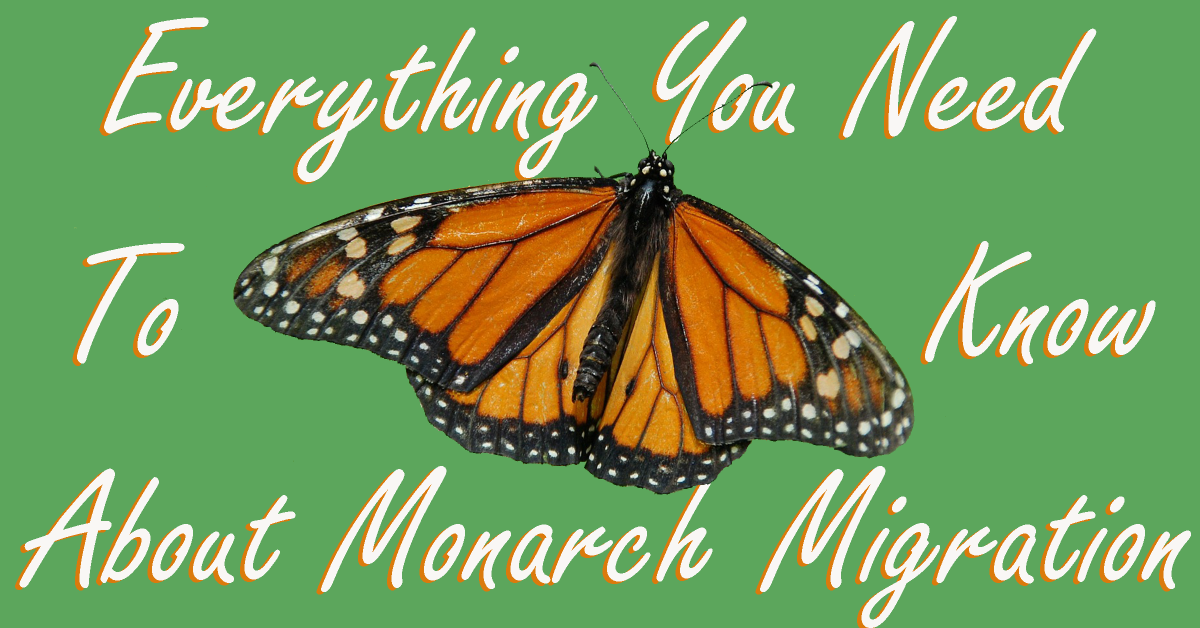 In February and March, the butterflies come out of hibernation and begin looking for a mate. These butterflies will then begin to migrate north and east looking for a place to lay their eggs. This begins the first generation. Eggs are laid on milkweed plants in March and April. These eggs will hatch into baby caterpillars that will then feed for about two weeks before beginning metamorphosis. After completing metamorphosis the monarch butterfly emerges and enjoys its short lifespan of about two to six weeks. Before dying the butterfly lays eggs for the second generation. This second generation is born in May and June and the third in July and August. Both of these generations will go through the same life cycle as the first generation. The fourth generation of Monarch butterflies is born in September and October and will go through the same process as the first three generations except for this generation of butterflies will live 6-8 months making the migration journey to the warmer climates of Mexico or California. 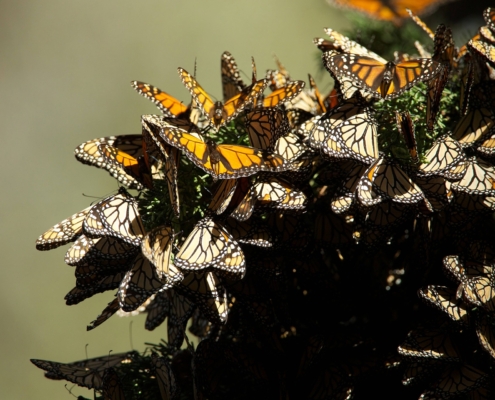 Monarch butterflies migrate for two reasons. The first is because the butterflies can’t withstand the freezing temperatures in the northern and central continental climates during winter. Second being their larval food source (milkweed) does not grow in their overwintering sites.

In recent years researchers have found the Monarch population numbers to be declining. Some reasons may include the loss of milkweed species needed for larval development, unintended effects of pesticide use and the loss of habitat in overwintering sites in both Mexico and California. Creating more Monarch habitat could help the declining populations. Planting milkweed species and other nectar-producing plants is a great place to start.  Start by planting our Monarch Rescue Mix! 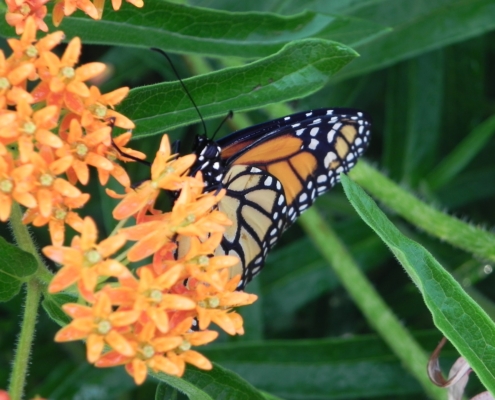 This could be a perfectly beautiful early Spring. We’ve had a week of warm sunny weather that is waking up the daffodils and tulips. Birds are flitting about and energetically singing out mating calls. It’s a joyful break from dark winter days. But then there’s the wind. Chinook winds. Or as they were called the year I lived in the Alps, “scheiss foen.” Everyone understood if the foen had arrived that you could be in a foul mood because of the irritability and headaches from the air pressure changes these mountain-made winds caused.

Wind can have devastating effects on a garden. Sure the strong winds can break stems and tree branches, but the greatest stressors comes from the drying effects of the winds. Plants close their stomata (leaf pores) to reduce water loss, but that slows the plants’ ability to grow. The winds desiccate the plant tissue and dry out the top inches of the soil meaning the plants need more water. Even plants under snow cover can get very drought stressed because the winds evaporate the snow before it can melt.

If it’s going to be a windy season, I make a few mental changes in my garden plans. Here’s things to consider if you have a windy garden:

Use more drought tolerant plants.
Increase your watering after the winds die down.
Grow shorter plants.
Grow plants like lavender with thinner leaves that won’t desiccate so easily.
Plant some tall ornamental grasses through the flower garden. They look beautiful in the wind and provide some wind break protection.
Plant evergreens as windbreaks.
Consider a garden wall.

And take an aspirin for your sinus headache.

So keep at eye out for a crevice garden near you. Botanic Gardens around the world are investing millions of dollars installing crevice gardens that highlight the art of stone and alpine gardens, and that provide us with ideas of how we will keep growing beautiful plants and flowers even as global warming reduces our available water in some places.

A week of warm days meant it was time  to cut back the ornamental grasses that are so popular in Colorado.  What is winter interest in December and January now looks messy and broken by winter winds and snow load.  Cutting back big grasses can be a bear of a task but it has its unexpected rewards.

Feather reed grasses like Karl Forster should be cut first because they green up the earliest so look much nicer if they get their haircut while mostly dormant.  One secret to keeping your ornamental grasses looking good (so you don’t have to dig them up and divide them much) is to cut them very short to within an inch or two of the ground instead of the ugly foot high cut that’s don’t in urban medians.

And in that inch or two above the ground is where I found the tiny neighborhoods hidden in winter debris.  The noise and racket I made cutting and then raking brought out the inhabitants.

First, adult ladybugs flew up…a little surprised at the sudden sun but not too alarmed…mostly looking around for aphids to eat, maybe water to drink.

Next the young lime-green lacewings stirred, reluctant to be disturbed as the true adolescents they were.  They tried to just move a centimeter to the left under some other debris to go back to sleep.  The bug equivalent of pulling the blankets over their heads.

Finally, I accidentally disturbed a solitary bee that was half an inch under the soil.  Poor bee was in a semi-dormant state and just lay on its side barely moving as the earthquake that was me had just thrown him to the surface. They reminded me more of the college student down in the basement on Spring Break.  The house needs to be burning down before they wake up at the crack of dawn on a Sunday morning.   I learned the hard way to be sure to wear gloves when because a groggy bee will reflexively sting you much like that surly college student is likely to throw something at you at 7 am.  I took a bit of loose dirt and debris and buried the bee again, hoping it would just settle down unharmed.  No point in waking up now before breakfast was ready. The dandelions don’t have flowers yet.

Nature in late winter hides most of her inhabitants.  They are in tiny nests under grasses and at the feet of willows or in debris under the shrubs.  The insects I saw in my first venture into the garden don’t bolt awake as we do on a Monday morning trying to get to work.  They’re more like cats, stretching and maybe yawning then turning around to find another comfy position to sleep in.   They are just adorable.

One evening near dusk in the garden, a gardening friend’s inquisitive granddaughter asked: “Where do bees sleep?”  This obvious question brought on a googling frenzy.  We could guess that honey bees might sleep in the hive. But what about the 4000 species of native solitary bees?  Hive-dwelling honey bees are a small percentage of the total bee population.

The answer should have been obvious:  Bees sleep on flowers! How adorable!

To be more precise, male native bees usually sleep on flowers.  When the female bees are laying eggs and raising young bees, they often sleep in solitary nests in the ground.

Sleeping on flowers has lots of advantages. It’s soft and very convenient.  You wake up and there’s breakfast (nectar and pollen) served in bed!

Some of my favorite stories of bees sleeping come from the squash bee family.  Squash bees spend their day inside a squash blossom.  As evening approaches, the male squash bee makes himself comfy as the squash flower wilts and closes around him.  In the morning, not too early, the flower opens again and the bee begins a new days foraging.  If the female bees have made nests, the nests are usually in soft dirt under the squash fruit.  So if you are growing pumpkins, it’s likely there are some young bees growing up under one of those pumpkins.

Foraging bees need the most sleep.  You’ll often find bumblebees taking an afternoon nap on a flower, all tuckered out from a hard day’s work. Younger bees and bees that do less foraging often just take short little 30 second naps.  Honey bees sometime sleep in the hive and sometimes they like to camp out and sleep under the stars. Next time you see a bee, motionless on a flower, don’t worry, it’s not dead…it’s just taking a nap!

Hungry pollinators are starting to wake up. Well, maybe not this week in Colorado if they are smart. We still have a foot of old snow on the ground, but the sun will come out later this week and I expect to see the first crocuses poke out from the melting snow.

The first warm days of Spring bring out lots of our pollinator friends. In a long winter like this, honey supplies are running short and honeybees are eager for fresh food. Wild bees and bumblebees who don’t have honey stores are very hungry. Ladybugs that woke up a few weeks ago and have been eating aphid eggs in the leaf litter are eager for some sweet nectar or pollen. Everybody’s hungry and are flocking to the first flowers to gather nectar and protein. They need to build up their own strength and to provide food for Spring babies.

Little bulbs like snowdrops and grape hyacinths re-seed themselves and naturalize a good-sized patch. If you don’t have these in your own yard, it’s easy dig up a few bulbs from a friend’s overgrown patch and transplant into your own garden. They don’t mind the transplanting too much and will bloom as usual…attracting more pollinators to your yard.

So bend down close to those little crocus flowers to see our pollinator friends. Bring a camera. The bees get groggy from gorging on pollen and are often moving pretty slowly, so it’s easy to get a good picture.

Bee on muscari and fly on snowdrop: http://urbanpollinators.blogspot.co.uk/2014/03/more-early-spring-flowers-for.html 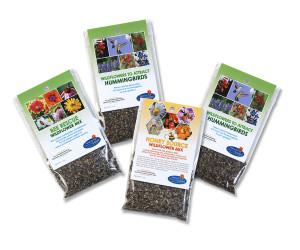 Scroll to top
All search results